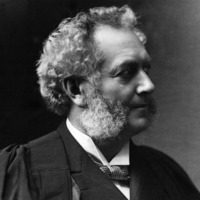 Born in 1842 at the Talbot Settlement, Dr. Walter H. Moorehouse came from a pioneer family that immigrated to Canada from Ireland in 1824. He began his study of medicine in his brother-in-law's, Dr. Alexander Graham's, practice in the village of Newbury. Receiving his M.D. from Trinity Medical School in 1874, Dr. Moorehouse completed postgraduate work at St. Thomas Hospital in London.

He began his own practice in London in 1875 and quickly took a position at Western's medical school. Originally taking the position of Chair of Normal and Pathological Histology when the school opened in 1882, Dr. Moorehouse held several other positions with the Faculty. In 1885 he became a Professor of Therapeutics and in 1887 he was a Professor of the Principles and Practice of Medicine until being named Professor Emeritus in 1907. In addition, he served as Dean of the Medical Faculty from 1892 to 1907.

Due to the contributions made to the Faculty and University as a whole, Dr. Moorehouse was awarded an honorary LL.D. degree in 1916. He died in 1921.