At the Faculty of Medicine's inception, a variety of clubs and events were created that addressed the interests of medical students and faculty. Although some of the clubs were specifically created for student interests, small class sizes allowed for a closer relationship to develop between students and faculty that resulted in events and clubs that involved them both. These bonds of friendship between the faculty and students created a community spirit that expanded into the social events and clubs seen below. 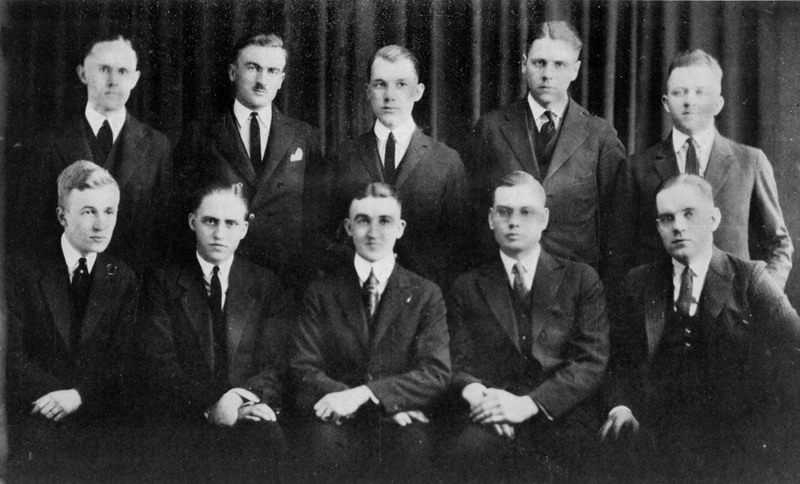 The Hippocratic Society Executive in 1922 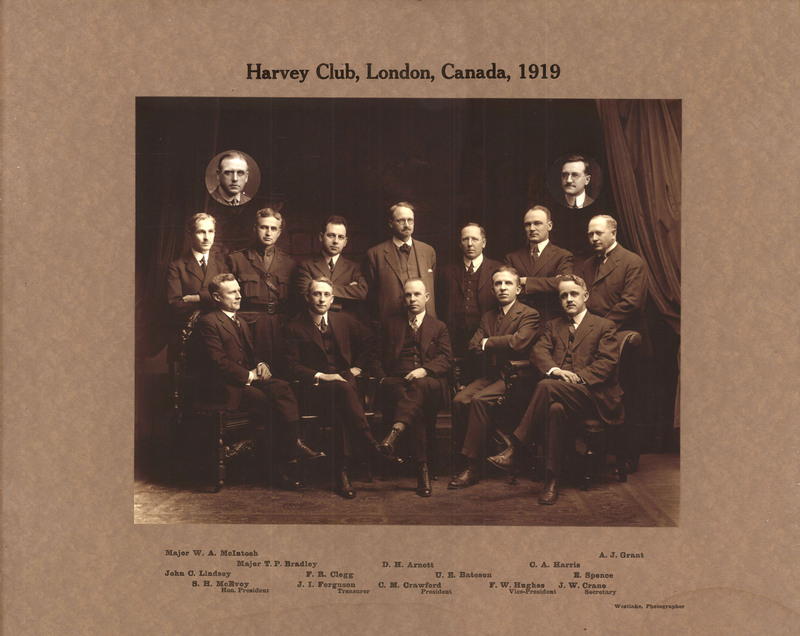 Founded in part by Dr. James W. Crane, the Harvey Club was initiated by a request made to Dr. Crane from several London doctors to provide refresher courses. Two lecture series were held in the winter of 1918. Upon completion of the second series on February 27, 1919, a dinner was held at Tecumseh House. At the dinner, Dr. Edward Spence suggested that a group be formed and a constitution and charter be created to form a club. The Harvey Club continues to this day. Several dinners are held throughout the year where both medical and non-medical lecture topics are given. A formal banquet and Ladies' Night are held annually. 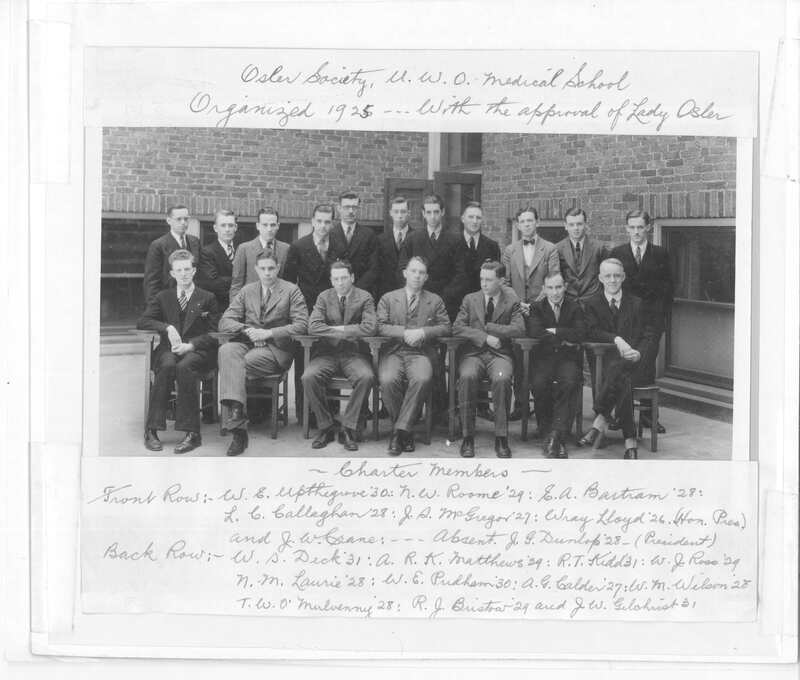 The Osler Society was created to foster the study of Sir William Osler's work, medical history, and cultural subjects. An honour society, the Osler Society membership consisted of: four students, selected on the basis of academic merit; honorary members; selected alumni and faculty; and, an elected president. Monthly meetings were held at the home of Dr. James W. Crane or at City Hall. An annual dinner and Osler Oration, a lecture on some aspect of Sir William Osler's life and work, was held at Tecumseh House and in attendance were: staff from The University of Western Ontario's Medical Journal; the Gazette; and, faculty members. A program was created for each dinner that included membership lists, the banquet schedule and initiates (recipients of Keys and Scrolls).

The Osler Society also published a bulletin, which summarized events, meetings and lectures for each year.

The Alpha Omega Alpha Honour Medical Society was founded in America in 1920. The University of Western Ontario founded its own chapter in 1942 although the Faculty had approved its founding in 1927. Dr. George Stevenson, a member of Alpha Omega Alpha from the University of Toronto, assumed the responsibility of forming the Chapter in 1935. With the support of the Deans of McGill and Toronto, the inaugural banquet of the Beta Chapter of the Alpha Omega Alpha Honour Medical Society took place on February 18, 1942 at the London Hunt and Country Club. The Society, which remains in existence to this day, organizes the delivery of lectures and papers on a variety of topics and holds an annual banquet where prominent physicians address the faculty and student members. 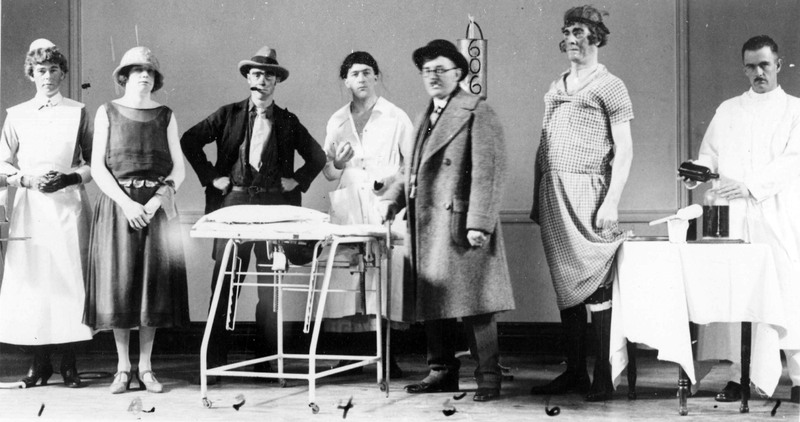 Originating from a suggestion made by Dr. McKibben to the Hippocratic Society, the Meds Barbecue was first held in March of 1923. The evening began with a basketball game between the faculty and students. After the game, the staff and faculty settled into the auditorium to watch skits performed by each class. The skits focused on the habits and eccentric behaviours of the faculty. A running commentary was shone through lantern slides between each act and the student orchestra performed. The evening ended with a barbecue in the gymnasium with the Dean, acting as the chef, carving a roasted pig. Although the Meds barbecue was enormously popular among students and faculty, the barbecue was discontinued in 1928 and was replaced by the annual banquet. A reprisal of the barbecue occurred in 1935 but it was quickly discontinued by decision of the Faculty Council. 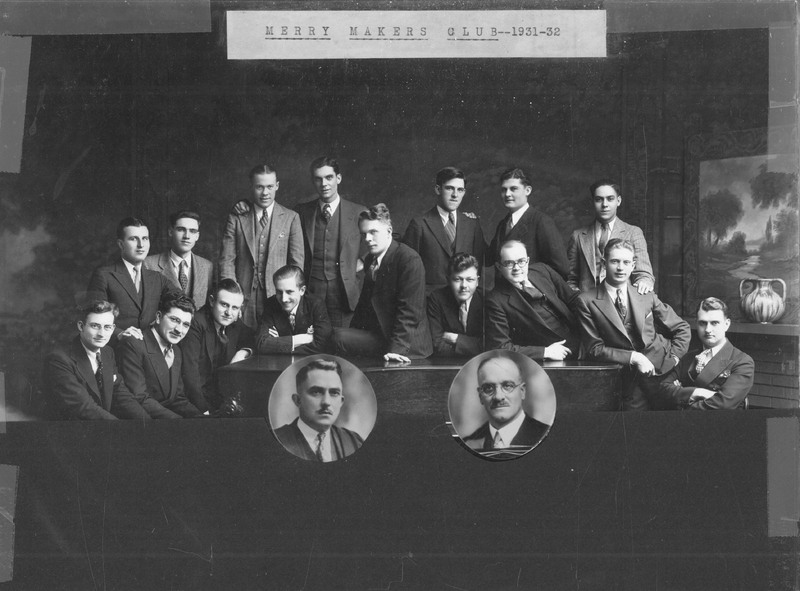 Taking the advice of Dr. J. W. Crane, students began holding singsongs in the auditorium in 1929. Held weekly at lunch, these events were so well attended that a group was founded and with this, the Meds Merrymakers was formed. An orchestra was also formed to provide music for the singsongs. The Meds Merrymakers Orchestra also provided music for dances and after basketball games. They were also featured on amateur radio station VE9BY in the Natural Sciences Building in 1931. Although the singsongs and orchestra continued into the 1930s, their popularity soon faded and they were replaced with musical acts and skits. These performances, after WWII, turned into the very popular Tachycardia. 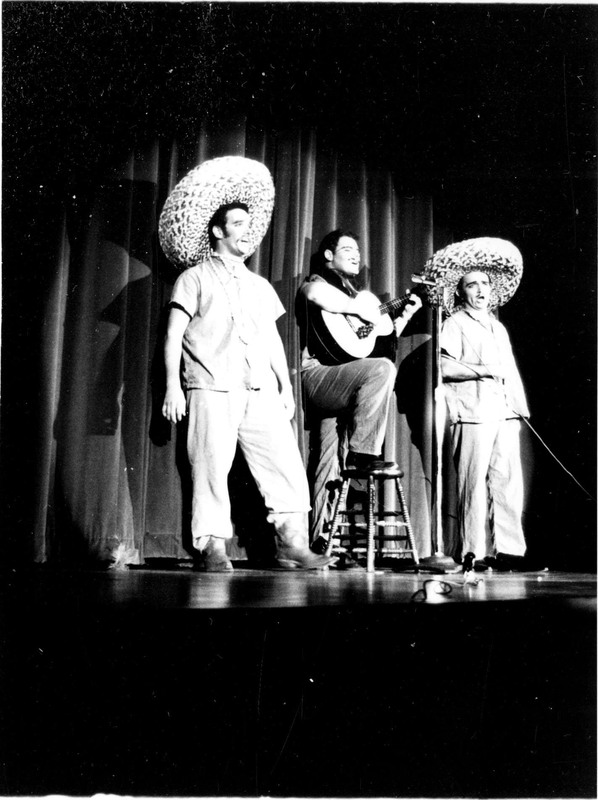 Tachycardia was first held on December 12 and 13, 1955. The Meds Merrymakers had decided to hold an annual production in the medical school auditorium. The musical numbers allowed for time in between acts for skits to be performed. Paul Walsh, a second year student, named the event Tachycardia, which means "an excessively rapid heart rate." The satirical skits were reminiscent of the Meds Barbecue performances as they often portrayed members of the faculty. The skits, performed by medical and nursing students, were so popular that Tachycardia was extended to a three night event. Dr. J. C. Rathburn and Dr. T. H. Coffey served as faculty advisors for Tachycardia. Mrs. Coffey, who had been a professional singer and actress in England prior to her marriage, offered assistance to the more inexperienced students. During Homecoming, Tachycardia would be performed the evening before the game with appropriate alumnus acting as the master of ceremonies. In 1952 and 1953, Max "Rawhide" Ferguson, a well known CBC radio satirical sketch writer and impersonator, performed the duties of the Master of Ceremonies. 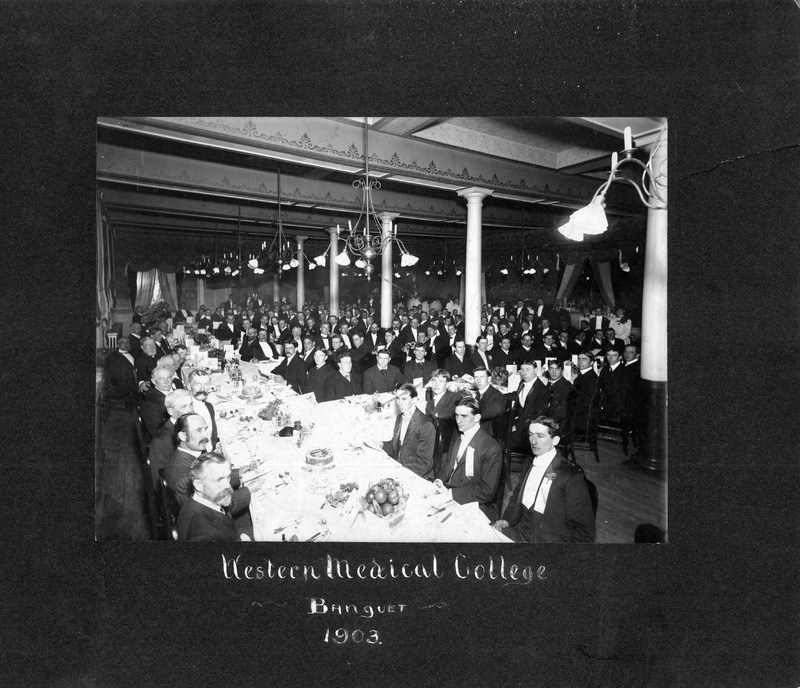 The Annual Banquet was the social event of the year. Held in December at Tecumseh House, the Annual Banquet was considered a major event and each year in October a Banquet Committee was elected. Each member of the Committee was assigned specific duties in preparation for the banquet. In 1898 the faculty voted to allot $125 toward the cost of the banquet with the remainder of the money coming from the faculty members.

The banquet room, although varying slightly from year to year, was decorated in Western University colours (purple and black). Christmas holly and bouquets of flowers adorned the room and musical entertainment was provided. A program of events was provided to each person attending. In addition to faculty, students, and graduates being invited, special guests representing other universities also attended. After the dinner, toasts and speeches were given.