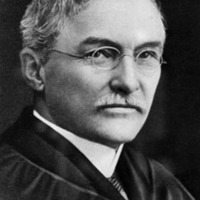 Born in 1843 near Sarnia, Dr. Friend Richard Eccles attended the University of Toronto's School of Medicine and received an M.B. in 1867 and an M.D. in 1868.* Opening a practice in Arkona, Dr. Eccles practiced for nine years before completing studies at St. Thomas Hospital in 1876.

Appointed Professor of Physiology, Dr. Eccles instructed students in this subject for six years before becoming a Professor of Gynecology. Also serving as Dean, Dr. Eccles was acknowledged for his work within the Department and was awarded an honorary LL.D. degree in 1916.

* M.B. is the equivalent of an M.D. in the British medical education system