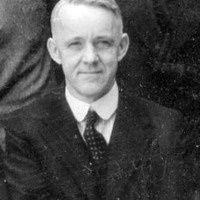 Born in 1877 near St. Thomas, Dr. James W. Crane studied medicine at the University of Toronto and received his M.B. degree in 1898.* Assisting in medical practice in Mitchell and Iona, Dr. Crane began a practice in Wallacetown near his friend Dr. John A. Macgregor. Encouraged by his friend, who became a part of The University of Western's medical faculty, Dr. Crane moved to London and began a practice in 1912. His practice was short lived as Dr. Crane quickly was given a full-time appointment as a lecturer in therapeutics in 1913. In 1914, Dr. Crane received the promotion of Professor of Pharmacology and was appointed Dean in 1925.

Known as a friendly and kind man, Dr. Crane was well liked by faculty and students alike. Retiring in 1946, Dr. Crane began a tree farm and arboretum on property he purchased in Iona. Later this land was donated to the County of Elgin which transformed the property into the James Wellington Crane Memorial Park.

* M.B. is the equivalent of an M.D. in the British medical education system